Sundial trial in the Eastern Bohemia

A sundial on a pyramid

The book deals especially with the sundials which work on a principle of an hour angle. On many photographs not only the principles of their work are illustrated but also the faults and failings of an individual sundial. The book is written in such a way which allows the reader to be introduced to secrets of gnomonics step by step and to get to know less known types or functions of sundials.

With the application of acquired knowledge in the book the reader is able to make their own sundial. The book might also be the inspiration for architects to design a sundial for the open space. On the examples, especially from abroad, it is obvious how sundials can make the space come to life.

If the information provided in the book is not sufficient for the reader, he can obtain additional information from information sources from which the author drew and the list is given at the end of the book.

The catalogue of sundials

The idea of making the catalogue of sundials came into being at Faculty of Natural Sciences (Charles University) in Praque. In the years 1981 - 1990 diploma papers which described the whole area of today's Czech Republic were elaborated. The total number of sundials filed at that time was 1,202. The results were not published. The team of authors continued this work and transferred the results into electronic form. Mentioned data were specified, completed and made topical. Some new places with sundial were found. The electronic catalogue was used as a basis for the book "Fixed Sundial Locations", which was published at the end of the last year.

The book contains 404 pages. You will find there the catalogue of 2,094 sundials on fixed locations in Bohemia, Moravia, Silezia and Slovakia. The catalogue itself is supplemented with statistics of sundials - according to regions, districts, and types, number of vertical sundials according to the orientation of the wall to cardinal points, to types of dial plates, poloses ...

In the book there are also the articles about the history of sundials, their principles, building and renovation, about different types, their odd locations and interests. The book is completed with the charts, surveys and maps, which makes looking for locations of sundials easier. The book contains 103 colour and 64 black and white photographs.

On the enclosed CD-ROM the electronic off-line version of the catalogue with 4,863 pictures of sundials is available and also the program SHC with the help of which it is possible to design a dial plate of a sundial.

The book is about not avialable.

The electronic version is continuously being completed and made topical. Up to date 25. 11. 2020 it comprises 4,332 sundials from the Czech Republic and 326 from Slovakia. The state of sundials is filed by 31,999 pictures which were taken by 1,388 authors.

The building of the former town hall is situated in the square in town of Dvůr Králové nad Labem (longitude 15° 49', latitude 50° 26') in Eastern Bohemia. Its look before the renovation of the facade in 2002 is perceptible from the picture.

The aim of the renovation was to give back the facade its historic look. The idea appeared then to realize a sundial which used to be on the building at the turn of the century, about 1900.

The only detail which could be used as a model is a digital enlargement.

For a project of sundial replica were used characterictic features which were used by Engelbrecht on his sundials: Numbers of each sundial are written in Roman figures on a gathered ribbon. The clock shows the time in 2 x 12 hour format. The dial's straight lines are provided with arrows. The author's name and the year 1797 are placed under the dial centre of the polos. Besides whole hours there are also sind for halves of an four and short lines? for quarters of an hour. On the dial plate there are also shown trpics and equinox with the symbol of zodiac.

I suggested to leave Engelbrecht's name on a new sundial. I recommended to mention two years - its origin (1797) and its "rebirth" (2002).

Sundial trial in the Eastern Bohemia

Sundial trial starts and finishes in Hradec Králové. It is possible to make it as a one - day tour by car.
Hradec Králové is the centre of the Eastern Bohemia. You might join the trip with a visit to our capital city - Prague, which is about 100 km far and easily reached by public transportation.

The function of a vertical sundial is limited by the time when the sun shines on the wall. A dial face lies under the centre of a dial (the point where all the hour lines, and a polar-pointing style, meet) and its scale is 12 hours maximum.

The shadow doesn't fall above the centre of a dial. 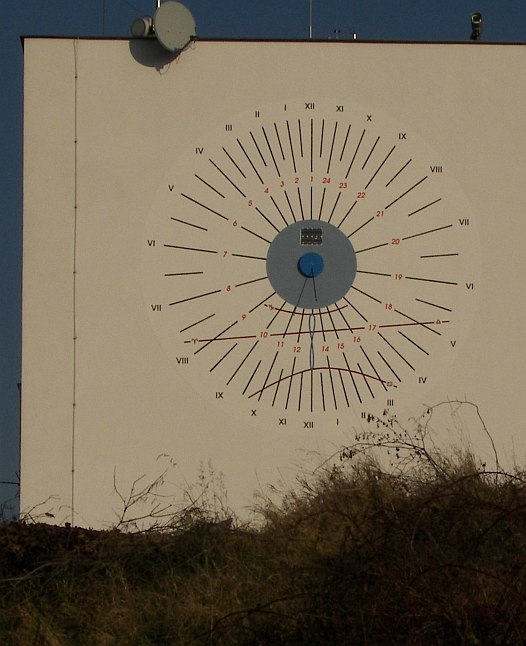 Sundial in Ústí nad Labem - Kočkov has a round face on a scale of 24 hours. It has two pointers. One of them is an oblique rod known from sundials. The second one is a laser pointer hidden under a round blue disc. Its movement is operated by the engine of a clockwise. It turns in an anticlockwise direction. One turn takes 24 hours. The ray of pointer functions as an hour hand.

If there is sufficient illumination, a sundial works according to a principle of hourly angle, the time is readout from the position of the dial's shadow.

When there is lighting reduction under the assigned figure, the light sensor switches on a laser pointer which turns by the help of a clockwise. Its movement is controlled by a radio reciever DCF 77 and it is corrected by PC. DCF77 is a longwave time signal and standard-frequency radio station. The 77.5 kHz carrier signal is generated from local atomic clock that is linked with the German master clock in Braunschweig. 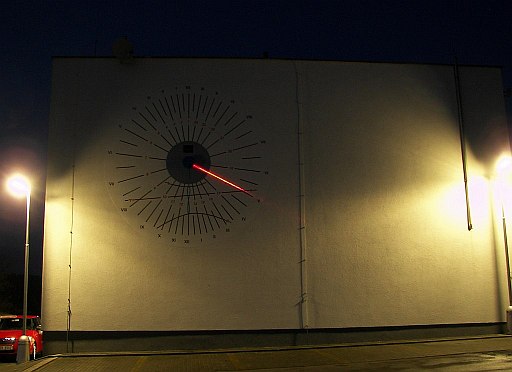 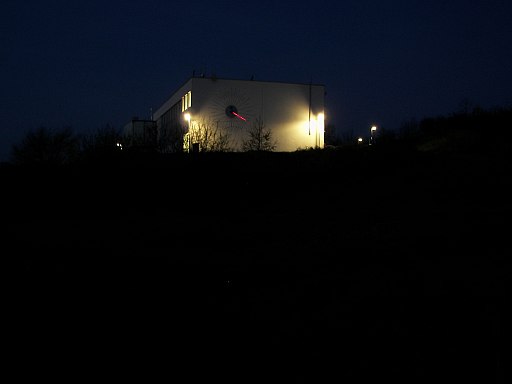 A sundial on a pyramid

The village of Malý Smokovec, which was interested in a sundial, is situated at the foothills of the High Tatras (the Slovak Republic).

As the shape of the object, on which a sundial is, should resemble the surrounding mountains, a regular three-side pyramid has been chosen.

The length of the foundation edges is seven metres. The inclination of the sides should be the same as the geographical latitude of the place.

One side of the face is turned to the south. This side was intended for a polar southern sundial.

Having removed a part of the pyramid contents from its west side, a vertical surface for western wall sundial was created.

On the ground in this part a chance of putting the face of the noon slot sundial appeared.

During the building of the pyramid the inclination of the side (49°) wasn't kept. That is why single time lines, which are realised by stainless steel stripes are not parallel to each other. They slightly diverge.

By the time lines Arabic numerals are located for the period of summer time validity and Roman numerals for the time when summer time doesn't run.

The time is defined by the shadow of one of the edges of the indicator.

The sundial shows the Local apparent time for central European latitude of 15°. 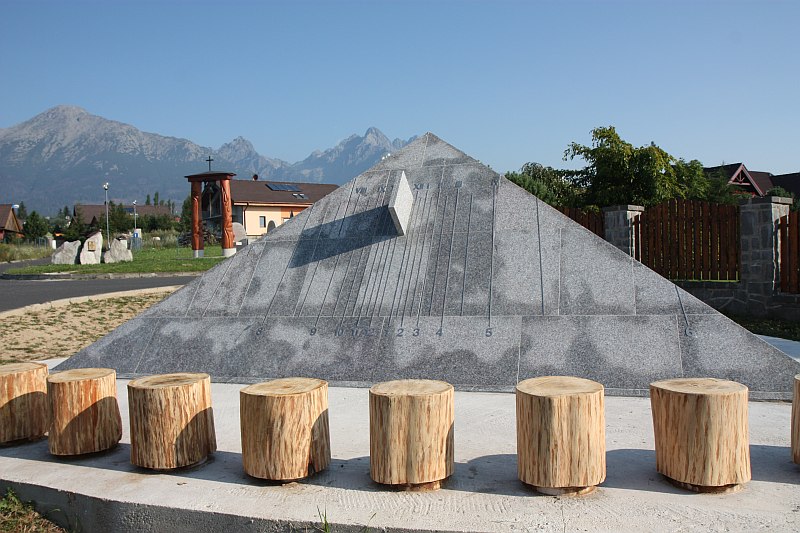 On the vertical triangle side, which is turned to the west, a western sundial is located; it is the solution for summer time. 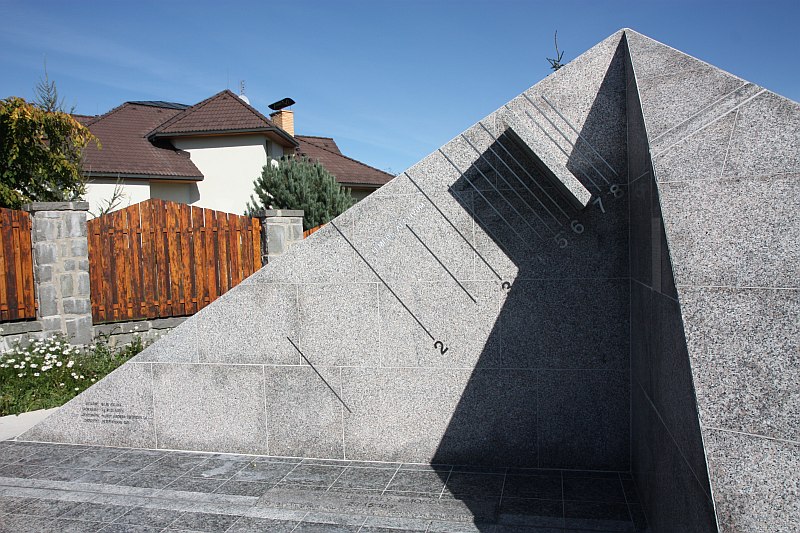 The print of the light, passing through the slit at the moment of apparent local noon, falls on the line of the local meridian. The noon sundial on the object is the only sundial showing the local apparent time. 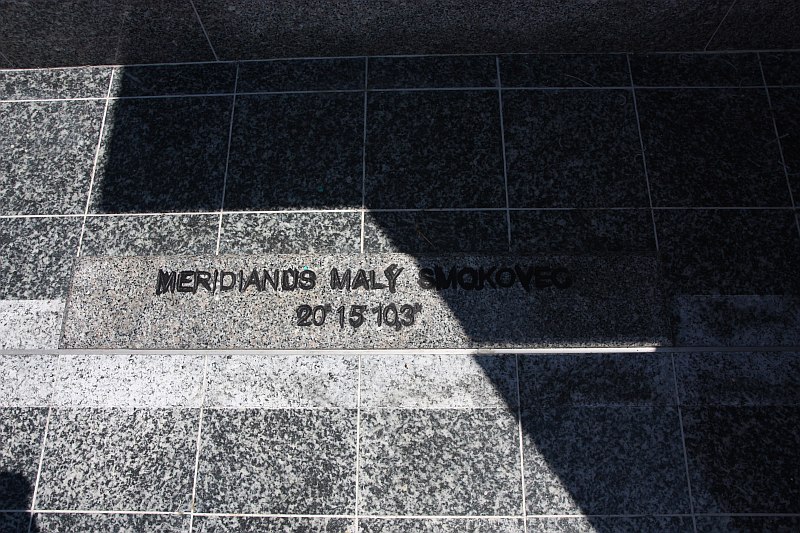 According to this chart an observer either adds or subtracts the number of minutes, which correspond to the given date, to the datum taken from the sundial.

The object is completed with 12 elements for sitting. These are located in a part of a circle in front of the southern sundial.

In front of the northern sundial there is an object showing the main peaks.

On the top of the inclined plane there are 7 stainless steel stripes with the names of single peaks and their heights. 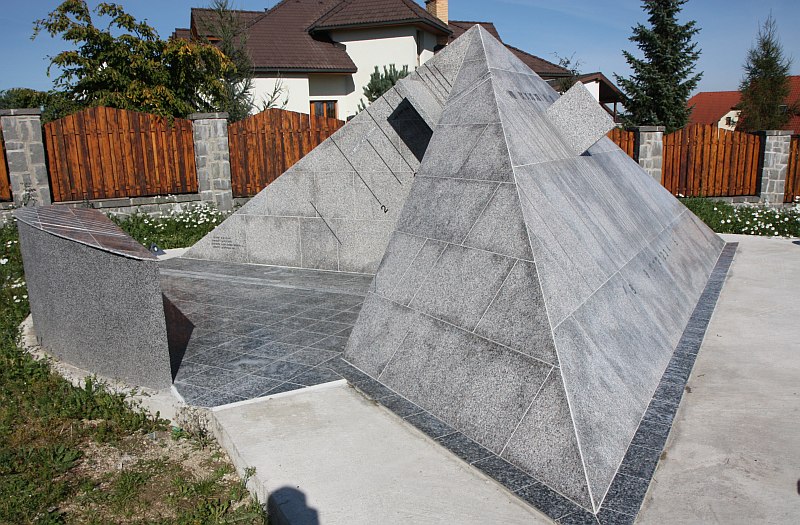